Now, a new study identifies a small molecule that could, in the future, be administered alongside standard chemotherapies to stave off colorectal cancer metastasis. 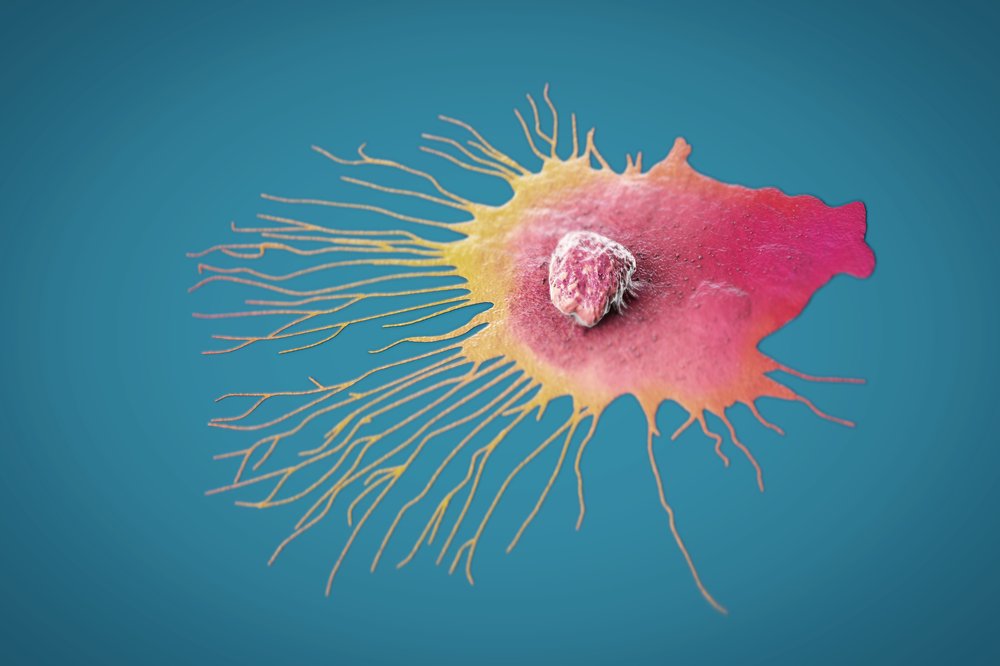 Scientific illustration of a metastasizing breast cancer cell. Metastasis is the major cause of death in most cancers, including colorectal cancer.

Colorectal cancer is projected to claim 53,000 lives in the United States this year alone and, as with most cancers, the disease is deadliest when it metastasizes. It follows that the most effective way to control it would be a drug that targets metastasis itself—preventing cancer cells from breaking off the primary tumor, or reining in rogue cells before they spread throughout the body and seed secondary tumors.

Now, a new study identifies a small molecule that could, in the future, be administered alongside standard chemotherapies to stave off colorectal cancer metastasis. The research, published in Science Advances, demonstrated how the compound, named RGX-202, foils a key pathway that cancer cells rely upon to hoard energy, thereby killing them and shrinking tumors in mice.

The findings have already led to a clinical trial in humans and may eventually give rise to a novel therapy that increases survival rates for multiple gastrointestinal cancers.

“Colorectal cancer is one of the top causes of cancer-related mortality,” says Rockefeller’s Sohail Tavazoie, head of the Elizabeth and Vincent Meyer Laboratory of Systems Cancer Biology. “We’ve found a critical pathway that promotes colorectal cancer metastasis and a novel therapeutic that appears to inhibit it.”

Back in 2016, researchers in the Tavazoie lab noticed that colorectal cancer cells had developed an ingenious strategy for surviving under oxygen-poor conditions. The tumors were mass-producing a unique enzyme within their cells, only to pump the enzyme out into the extracellular space. There, the enzyme would convert the metabolite creatine (which is abundant outside of cells) into phosphocreatine, which the cancer cells would finally import back across their membranes.

The cancer cells were manufacturing and stockpiling phosphocreatine.

That was interesting to Tavazoie, because phosphocreatine is just what a tumor needs to survive and thrive. Phosphocreatine is energy-rich—stored in healthy muscle to ensure that there’s always enough spare energy for key metabolic events to go off without a hitch—and it is one of the few compounds that cells can use to produce energy in the absence of oxygen. For notoriously hypoxic gastrointestinal cancers, phosphocreatine is a must-have.

Upon further investigation, Tavazoie and colleagues ultimately discovered the lynchpin of the entire energy-hoarding process: SLC6A8, a channel embedded in the cell membrane that functions as a gateway for incoming phosphocreatine and creatine.

“We hypothesized that, if we inhibited this channel, metastasis rates would decrease because the cancer cells would be unable to bring in the phosphocreatine,” Tavazoie, the Leon Hess Professor, says.

Several laboratories subsequently ran with Tavazoie’s theory. And indeed, follow-up studies confirmed that this pathway, built around a single transport channel, was likely influencing the growth and metastasis of many cancer types, from breast cancer to pancreatic cancer.

Tavazoie and colleagues chose to continue focusing on colorectal cancer and began searching for molecules that bore enough resemblance to phosphocreatine to gum up the channel by tricking it into binding an imposter. His team, led by Isabel Kurth, Norihiro Yamaguchi, Celia Andreu-agullo and Masoud Tavazoie, landed on the small molecule RGX-202, which their coauthors at the biopharmaceutical company Inspirna further developed into a potent oral drug candidate. (Sohail Tavazoie is a scientific cofounder of Inspirna).

RGX-202, their work revealed, reduced colorectal cancer tumor growth across the board in mice, impacting even tumors with mutations that are currently considered undruggable with targeted therapies. In mouse models, the small molecule also prevented metastasis to the liver and functioned well alongside frontline chemotherapies, working in concert with existing drugs to beat back tumors.

Encouraged by these results, scientists and clinicians at multiple institutions, along with Inspirna researchers, began a Phase 1 trial in humans with advanced stage colorectal cancer.

“The trial demonstrated that the compound is safe and alters creatine metabolism in humans, just as it did in mice,” Tavazoie says. “We also observed improvements in patient outcomes, suggesting that the compound should be investigated in further clinical trials.”

Toward a first-line therapeutic

One pressing question, which future studies will address, is how exactly RGX-202 inhibits the channel. “A simple notion would be that it gets into the transport channel and plugs it up, but we do not yet know, mechanistically, how that works,” Tavazoie says. “All we know is that, when we introduce this small molecule that looks like creatine, the channel becomes impaired.”

In the meantime, Tavazoie and colleagues intend to move their research into a Phase 2 trial as early as 2022, during which metastatic colorectal cancer patients whose cancers have progressed on frontline chemotherapy will receive RGX-202 alongside conventional chemotherapy. Eventually the researchers hope the therapy will also prove able to prevent metastasis from occurring the in first place.

“Our ultimate goal is to prevent, not just treat, relapse,” Tavazoie says.