Translate Page Original Page
HomeNewsScience and Health NewsThe Neurobiology of Noshing: Why is it so easy to overeat calorie-rich tasty foods?

UNC School of Medicine scientists led lab experiments suggesting a particular brain circuit motivates us to overeat, and it could be a new target for anti-obesity and binge-eating treatments 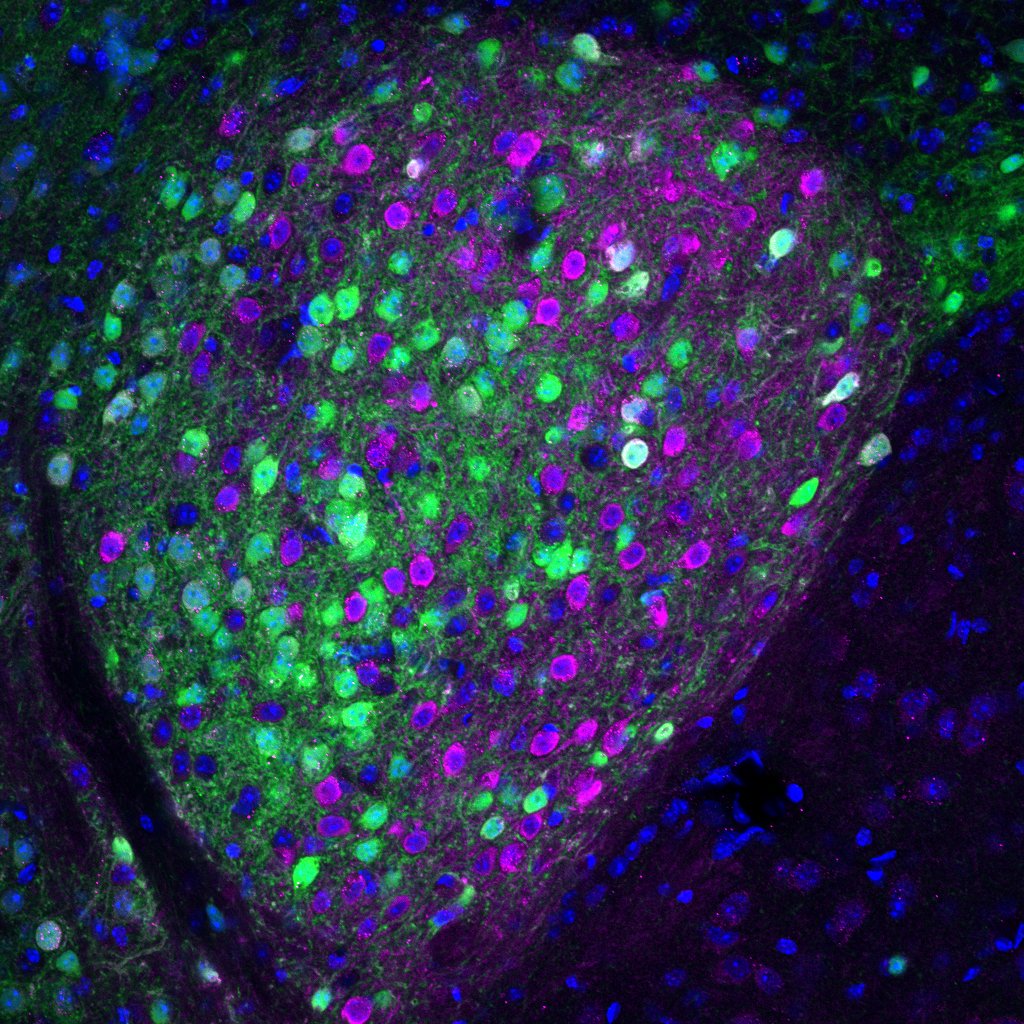 When you eat something super tasty, ever wonder why you really don’t want to stop even though you know you’ve eaten enough? Scientists at the UNC School of Medicine may have found the reason.

In lab experiments, Thomas Kash, PhD, the John R. Andrews Distinguished Professor in the Department of Pharmacology, and colleagues discovered a specific network of cellular communication emanating from the emotion-processing region of the brain, motivating mice to keep eating tasty food even though their basic energy needs had been met.

The existence of this mammalian brain circuit, described in a paper in Neuron, might help explain why humans so often overeat in our modern environment of abundant and delicious fare. The circuit is a byproduct of evolution, when large calorie-rich meals were scarce, and so our brains were wired to devour as many calories as humanly possible because no one knew when the next super meal would come.

“This circuit seems to be the brain’s way of telling you that if something tastes really good, then it’s worth whatever price you’re paying to get to it, so don’t stop,” Kash said.

Scientists in search of anti-obesity remedies have spent decades researching and targeting brain cells and circuits involved in ordinary, “homeostatic” feeding, which is triggered by hunger and keeps our energy level up. But this approach has had limited success. More recently, some scientists have been studying “hedonic” feeding – the pleasure-driven eating of calorie-rich food that tends to go way beyond our strict energy needs.

Hedonic feeding is thought to reflect modern humans’ lingering adaptation for ancient environments where famines were frequent. Perceiving calorie-rich food as particularly tasty and pleasurable, and bingeing on it whenever it was available, would have conferred a crucial survival advantage by storing up extra energy. Following that instinct now, in a time of plenty, can lead to obesity – a condition affecting about 40 percent of adults in the United States – and related conditions such as diabetes, heart disease, and cancers.

“There’s just so much calorically dense food available all the time now, and we haven’t yet lost this wiring that influences us to eat as much food as possible,” Kash said.

Experiments in the past few years have suggested that our wiring for hedonic feeding involves nociceptin, a small protein that works as a signaling molecule in the mammalian nervous system. Kash’s laboratory and other groups have found that compounds blocking nociceptin activity – called nociceptin receptor antagonists – have little or no effect on homeostatic feeding by lab rats and mice, but these compounds do curb hedonic bingeing on tasty, calorie-rich foods. Thus, drug developers have eyed these antagonists as potential anti-obesity, anti-binge-eating drugs, and researchers have been eager to identify the specific brain circuits through which they work. The goal would be to develop a more targeted treatment.

Identifying this circuit is largely what Kash and colleagues accomplished in their new study. They engineered mice to produce a fluorescent molecule along with nociceptin, literally illuminating the cells that drive nociceptin circuits. There are multiple nociceptin circuits in the brain, but Kash and colleagues observed that one in particular became active when the mice got a chance to binge on calorie-rich food. The circuit projects to different parts of the brain, including those known to regulate feeding. It starts in an emotion-processing region of the brain called the central amygdala.

Deleting about half of the nociceptin-making neurons in this circuit reduced the mice’s bingeing and kept their weight down when they had access to rich food, without affecting their intake of ordinary chow.

“Scientists have studied the amygdala for a long time, and they’ve linked it to pain and anxiety and fear, but our findings here highlight that it does other things too, like regulate pathological eating,” Kash said.

He and his team are now studying in more detail how this circuit works, the timing of its activity in relation to feeding and other factors, and how nociceptin antagonists alter its functions.

First author J. Andrew Hardaway, PhD, research assistant professor of pharmacology at the UNC School of Medicine, said, “Our study is one of the first to describe how the brain’s emotional center contributes to eating for pleasure. It adds support to the idea that everything mammals eat is being dynamically categorized along a spectrum of good/tasty to bad/disgusting, and this may be physically represented in subsets of neurons in the amygdala. The next major step and challenge is to tap into these subsets to derive new therapeutics for obesity and binge eating.”

Other scientists are studying nociceptin antagonists as possible treatments not only for obesity and binge-eating but also for depression, pain, and substance abuse.