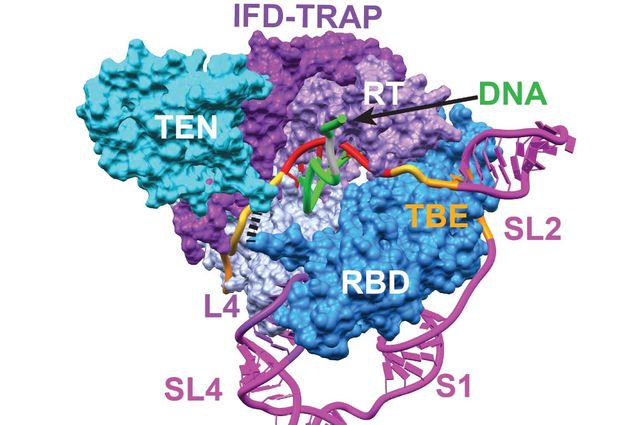 
“For the first time, we have a framework, or blueprint, of telomerase,” said researcher Lukas Susac. Telomerase's "catalytic core" is illustrated here.

Cancer, aging-related diseases and other illnesses are closely tied to an important enzyme called “telomerase.” UCLA researchers report in the journal Cell the deepest scientific understanding yet of this once-mysterious enzyme, whose catalytic core — where most of its activity occurs — can now be seen in near atomic resolution.

“We’re now seeing not just the face of the clock, we’re seeing how the components inside interact to make it work,” said Juli Feigon, a professor of chemistry and biochemistry in the UCLA College and a senior author of the study. “At each step, we zoom in closer and see more and more details, and can now begin to deduce not just what the enzyme looks like, but also how it functions. Knowing that may lead to the development of new drugs that target specific parts of the enzyme.”

In addition to reporting the highest level of detail ever seen of the structure of telomerase’s catalytic core, shown in the animation below, the researchers report for the first time they have captured telomerase in the process of making DNA.

“For the first time, we have a framework, or blueprint, of telomerase,” said Lukas Susac, a UCLA postdoctoral scholar in Feigon’s laboratory and a co-lead author. “We know people have telomerase mutations and get sick, but we have had no understanding of how this came to be, beyond knowing their telomerase doesn’t work. Now we can say the problem is with a specific site within telomerase and perhaps see why the enzyme sometimes does not work properly. To treat an illness, first we have to locate where the problem occurs, and now this is possible. Of course, there are still steps to go.”

Telomerase’s main job is to maintain the DNA in telomeres, the structures at the ends of human chromosomes. When telomerase is not active, each time the cells divide, the telomeres get shorter. When that happens, the telomeres eventually become so short that the cells stop dividing or die.

Cells with abnormally active telomerase can continually rebuild their protective chromosomal caps and won’t die, said Feigon, who also is a member of UCLA’s Molecular Biology Institute and an associate member of the UCLA–Department of Energy Institute of Genomics and Proteomics. Over time, this is harmful because DNA errors accumulate and damage cells. Telomerase is especially active in cancer cells, which enables cancer to grow and spread.

Feigon’s research team conducted the study using single-celled microorganisms called “Tetrahymena thermophila,” which are commonly found in freshwater ponds. Telomerase’s components are relatively well-known in Tetrahymena, and it is the organism in which telomerase and telomeres were first discovered. The central catalytic core of telomerase is similar in all organisms, including humans.

While other reverse transcriptases can copy any arbitrary RNA sequence and make DNA out of it, telomerase’s reverse transcriptase copies only a specific six-nucleotide RNA and does so many times to make a long chain of DNA. (Nucleotides are the building blocks of DNA and RNA.) TRAP plays a crucial role in adding on small pieces of DNA to the ends of chromosomes to keep them from shortening every time cells divide.

The researchers report for the first time the structure, shape and significance of TRAP, and the region with which it interacts.

“A joy of science is the moment when you are the first person in the world to see something important,” said Feigon, a member of the National Academy of Sciences. “I remember looking at this structure when we got it and thinking we had solved a significant piece of the puzzle and were the only people who had seen this. It’s very exciting.”

Feigon’s research team is learning how the regions interact and communicate with one another. In a 2015 study in the journal Science, Feigon and colleagues reported the location of a major region called “TEN.” Now the researchers report the structures of TEN and TRAP, and how they interact with each other and with the telomerase RNA. Many mutations that scientists attributed to the TEN region in fact disrupt TEN’s interaction with TRAP, the researchers report in Cell.

What are the implications of the research for fighting cancers? Cancer cells keep reproducing, and for this to occur, telomerase must be highly active — which it is not in healthy cells. To reduce this, it would be useful to know how to target the enzyme’s activity. This new research brings this goal closer to reality by providing clues about what parts to target.

“We have very deep insights into how telomerase works and how the components work together,” Susac said. “Each of these interactions could be a point to target, and possibly disrupt or enhance the function of telomerase. Precision will be very important; simply hitting telomerase with a hammer won’t work. Telomerase is a very central and unique enzyme in many organisms. Now we have locations to aim for.”

The scientists used a technique called “cryo-electron microscopy” that enables them to see the enzyme in extraordinary detail, and used computational modeling to interpret their data. The research team has expertise in several fields, including biochemistry, molecular biology, computational biology and biophysics.