The study, published in the prestigious journal Science Robotics, was led by Philippe Malcolm, Ph.D., assistant professor in biomechanics at UNO, marking a new milestone for high-impact institutional research. 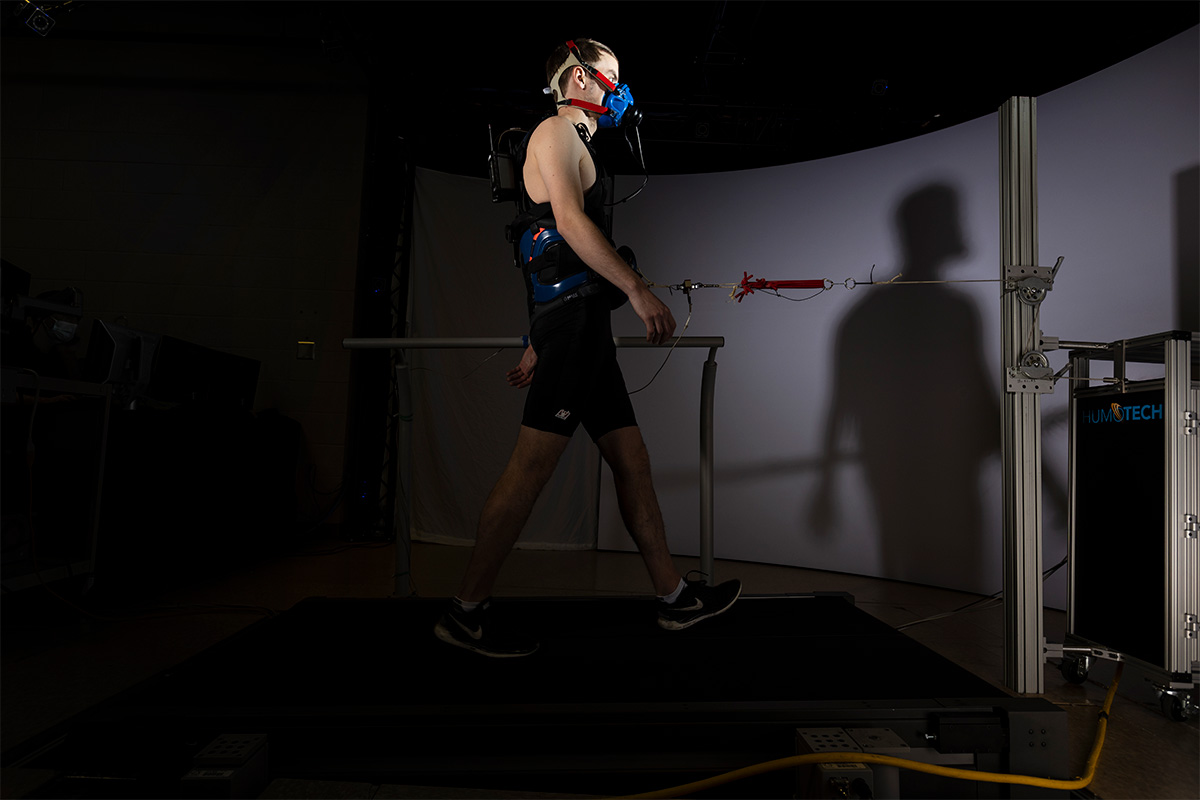 UNO researchers found that a strategically-timed pull from a waist belt connected to a pulley can help an individual use less energy for each step while walking. However, the best time to pull was not what researchers expected. The findings could have implications for patient therapy practices.

Findings by researchers at the University of Nebraska at Omaha (UNO) describe a novel way to reduce the energy people spend to walk, as much as by half, which could have applications for therapy received by patients with impaired walking abilities.

The study, published in the prestigious journal Science Robotics, was led by Philippe Malcolm, Ph.D., assistant professor in biomechanics at UNO, marking a new milestone for high-impact institutional research.

This research shows that a strategically-timed pull from a waist belt connected to a pulley can help an individual use less energy for each step while walking. However, the optimal timing of that forward pull was what came as a surprise.

Based on previous literature, the researchers believed they would see the highest energy savings by pulling when the individual is trying to propel forward against the ground. That hypothesis was based on a bioinspired assistance strategy, meaning it is inspired by how our biological muscles work during walking.

Prokopios Antonellis, Ph.D., the first author of the study and now a postdoctoral fellow at Oregon Health & Science University, performed this research during his doctoral program at UNO. “Although bioinspired actuation can have certain benefits, our study demonstrates that this is not necessarily the best strategy for providing the greatest reduction in metabolic cost or energy expended,” Antonellis said. “This finding supports a greater emphasis on biomechanical testing rather than trying to predict optimal bioinspired strategies.”

The device works by providing timed pulls from a motorized pulley while an individual walks on a treadmill. Since it only requires wearing a waist belt, it is relatively easy to make individualized adjustments compared to more complicated devices.

The findings about optimal timing could have applications for exercise therapists in clinical settings providing care for patients with conditions such as peripheral artery disease. Iraklis Pipinos, M.D., F.A.C.S., a vascular surgeon at the University of Nebraska Medical Center (UNMC) and the Omaha VA Medical Center, who collaborated with the study team, sees the benefits of this research.

“My patients have hardening of their arteries causing problems in the circulation to their legs, resulting in leg pain and reduced mobility. I was touched to hear that certain patients felt relief in their legs for the first time when they tried the device. We are now thinking of ways these methods can be used in everyday practice, for example, by using systems for assisted walking exercise therapy at physical therapy clinics,” Pipinos said.

“When we walk, there is a short period between steps where one foot is stopping its forward motion while the other is preparing to accelerate to take the next step forward. Our research shows that this brief window where both feet are on the ground is the best time to apply force to assist walking most efficiently,” Malcolm said.