Apple's ECG app and irregular heart rhythm notifications on the Apple Watch Series 4 and 5 have received domestic approval and certification from Japan's medical authorities, indicating that both features should go live in the country very soon.

The approval was confirmed by the Japanese Association for the Advancement of Medical Equipment (JAAME) on Friday, September 4, and subsequently reported by tech blog iPhone Mania today. An imminent update to Apple's watchOS will likely turn on the features for existing ‌Apple Watch‌ owners.

As a result of the approval, the Ochanomizu Department of Cardiology has begun moving forward with its ‌Apple Watch‌ Outpatient program, which will help registered patients use devices to help them record suspected arrhythmia attacks and submit them for further detailed examination.

‌‌Apple Watch‌‌ Series 4 and 5 users can generate an ECG waveform in just 30 seconds by placing their finger on the Digital Crown. The idea is that you can take this information to your doctor, if the results are abnormal, and use it as a basis to discover if you have any larger issues at hand. 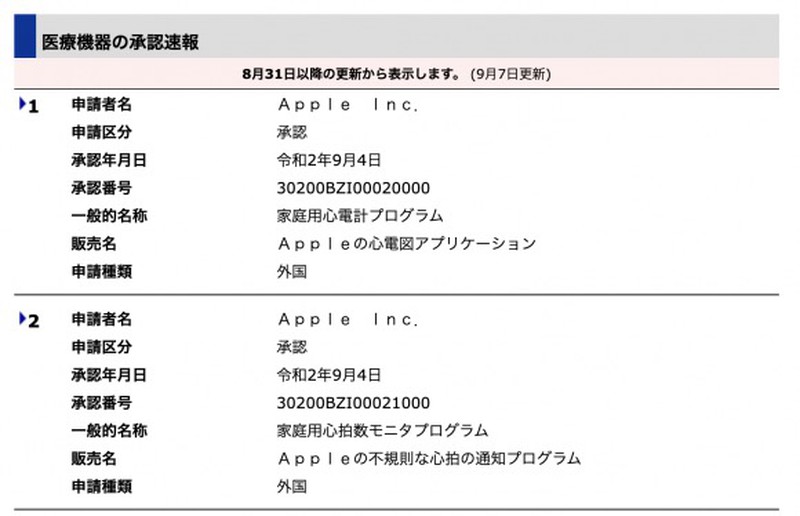 Apple routinely has to gain approval from government health agencies before marketing the ‌‌Apple Watch‌‌'s ECG feature in different countries. Apple won U.S. FDA clearance to promote the function when the ‌‌Apple Watch‌‌ Series 4 launched in 2018.

Japan's Pharmaceuticals and Medical Devices Agency (PMDA) updated its list of registered foreign manufacturers to include Apple as a "certified entity" in June.