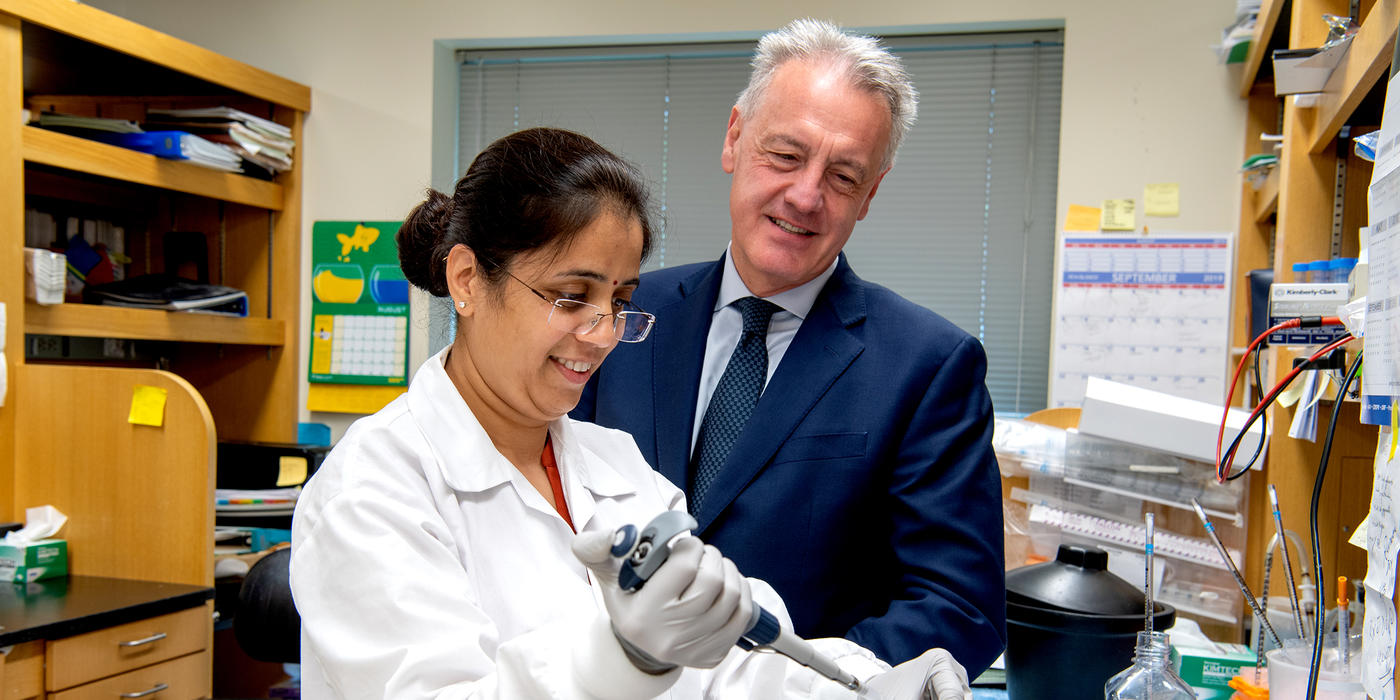 In a recently published study, the laboratory of Dario C. Altieri, M.D., Wistar president and CEO, director of the Institute’s Cancer Center and the Robert & Penny Fox Distinguished Professor, showed that MFF is highly expressed in cancer and interacts with VDAC1, a key regulator of mitochondrial cell death, to keep tumor cells alive.

“Disruption of the MFF-VDAC1 complex in vitro resulted in killing of cancer cells, pointing us in the direction of a potential therapeutic target,” said Altieri, who is the senior author on the study. “The next step was to create a molecule that could disrupt the protein-protein interaction between MFF and VDAC1 and deliver preclinical anticancer activity without harming normal cells, and we are excited for the clinical potential of this new agent.”

Altieri and collaborators analyzed the structure of the MFF-VDAC1 interface to determine what portions of the MFF protein are required for its interaction with VDAC1. A synthetic peptide designed to contain these MFF regions was able to compete with MFF for binding to VDAC1, disrupting the interaction. As a result, this induced acute mitochondrial dysfunction and consequently cell death.

Treatment with the MFF peptide killed prostate cancer and melanoma cells, including drug-resistant cells, while it did not affect the survival of normal prostate cells and fibroblasts, suggesting that transformed cells are more dependent on the integrity of the MFF-VDAC1 complex than normal cells.

Based on these proof-of-concept studies, researchers then generated a cell-permeable peptidomimetic molecule, or a compound that mimics the inhibitory peptide, to target the complex in vivo for targeted cancer therapy.

This compound was tested in different preclinical settings, both in vitro in 3-D models, using patient-derived lung and breast cancer organoids and glioblastoma neurospheres; and in vivo, using mouse models of prostate cancer cell transplants and patient-derived melanoma transplants (known as PDX models). In all conditions, the peptidomimetic molecule effectively delivered potent anticancer activity. Treatment was well tolerated in mice, with no overt signs of toxicity.

“Targeting protein-protein interaction in mitochondria is a validated therapeutic strategy that has already produced clinically approved cancer treatments,” said Altieri. “We are hopeful that this compound will be translated into a novel anticancer therapy with potential to be effective in multiple cancer types and less prone to drug resistance.”