Hao Wu and Judy Lieberman previously revealed the 3D structure of the gasdermin pore, a critical step in both normal and excessive inflammation. Animation: Wu lab

Inflammation is the alarm system by which cells first respond to potential danger, but in excess, inflammation can be fatal.

In COVID-19, for example, overactive inflammation has led to severe complications and even death for many hospitalized patients.

Activation of the gatekeeper protein, gasdermin D, is the final common step in the process of inflammatory cell death, or pyroptosis, and the resulting release of inflammatory cytokines seen in many serious conditions, including sepsis.

Sepsis is the leading cause of death in children in the world and contributes to about a third of deaths in hospitalized adults.

The researchers report May 4 in Nature Immunology that mice treated with disulfiram did not develop fatal sepsis, compared with untreated animals.

The findings offer hope for diseases that involve runaway inflammation, although it remains to be seen whether the results can be replicated in people.

“This research discovery is coincidentally very timely today because most people think that the clinical deterioration of COVID-19 patients is mediated by a cytokine storm, or excessive release of inflammatory molecules,” explained Judy Lieberman, professor of pediatrics at HMS and chair of cellular and molecular medicine at Boston Children's.

Lieberman is co-senior investigator of the study together with Hao Wu, professor of biological chemistry and molecular biology in the Blavatnik Institute at HMS and the Asa and Patricia Springer Professor of Structural Biology at Boston Children's.

“Even though there has been a lot of interest, there have not been any bona fide gasdermin D inhibitors,” said Wu. “We screened thousands of compounds and found that the one that worked best—disulfiram—is already on the market, is inexpensive, has a 70-year history of drug safety and could be repurposed pretty quickly.”

When an invading virus or bacterium enters a cell, it triggers inflammation, unleashing a cascade of events.

One key event is called pyroptosis, a "fiery" or inflammatory cell death. In pyroptosis, the cell’s membrane literally explodes, releasing inflammatory molecules such as interleukin-1, which causes fever.

In a paper published in Nature in 2016, Lieberman and Wu discovered that gasdermin D forms membrane pores. When these pores open, inflammatory molecules spill out of the cell, causing pyroptosis.

Too much inflammation contributes to human diseases, including sepsis, inflammatory bowel disease, gout, type II diabetes, cardiovascular disease and Alzheimer’s disease and is the hallmark of rare inflammatory genetic diseases.

“We knew that gasdermin D is the gatekeeper of the pathway leading to pyroptosis and spillage of inflammatory cytokines,” said Wu. “If we could find a compound that would inhibit this particular step, that could be an attractive drug target to prevent pyroptosis when it was not needed.”

He found just 22 active compounds. Disulfiram was at the top of the list.

Next, the team studied mice sick with sepsis.

They observed that disulfiram blocked pyroptosis and its explosive release of inflammatory molecules. Mice treated with disulfiram survived, while those not receiving the drug died from sepsis within one day.

"There have been hundreds of clinical trials looking for drugs to stop sepsis and the overwhelming inflammatory response without success,” said Lieberman.

“We hope that with this new discovery—inhibiting gasdermin D that is in a critical location in the inflammatory pathway—we could actually have a therapy that might work,” Lieberman said.

Hu is co-first author of the paper along with Xing Liu of HMS, Boston Children's and the Chinese Academy of Sciences. 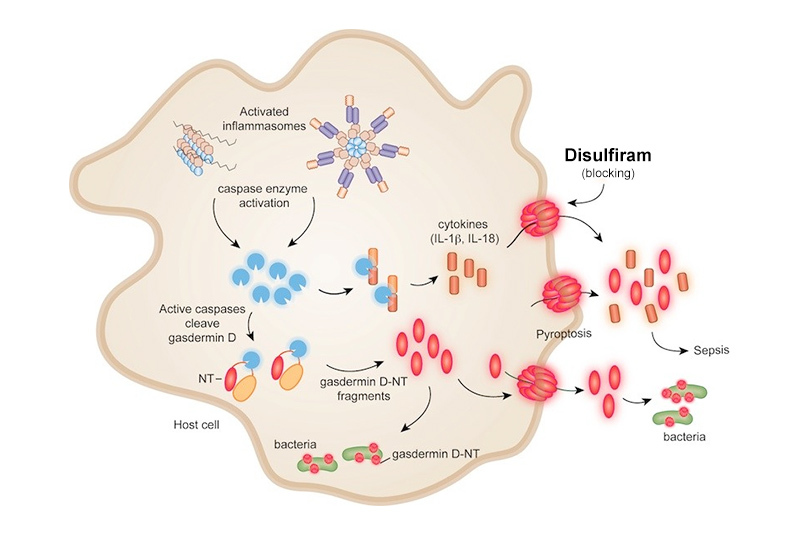 The team is now looking to apply these findings to the new coronavirus.

“Because COVID-19 can produce an inflammatory syndrome that is very similar to sepsis, we wonder whether disulfiram can be used to treat severely ill COVID-19 patients,” said Wu.

“We know from a recent report that disulfiram also inhibits a coronavirus protease, one of the essential proteins of the virus causing COVID-19,” she said.

Plans are already in place to study pyroptosis and coronavirus. The ultimate goal is to start a clinical trial with disulfiram in COVID-19 patients.

“The truth is that gasdermin D contributes to so much pathology in the body that we think an effective gasdermin D inhibitor like disulfiram could open up many therapeutic possibilities,” said Lieberman.