The Prussian carp is considered one of the most successful invasive fish species in Europe. An international research team led by Dunja Lamatsch from the Research Institute of Limnology, Mondsee, has now described its complete genome for the first time. This provides a much better understanding of the prussian carp's peculiar and efficient reproductive method. 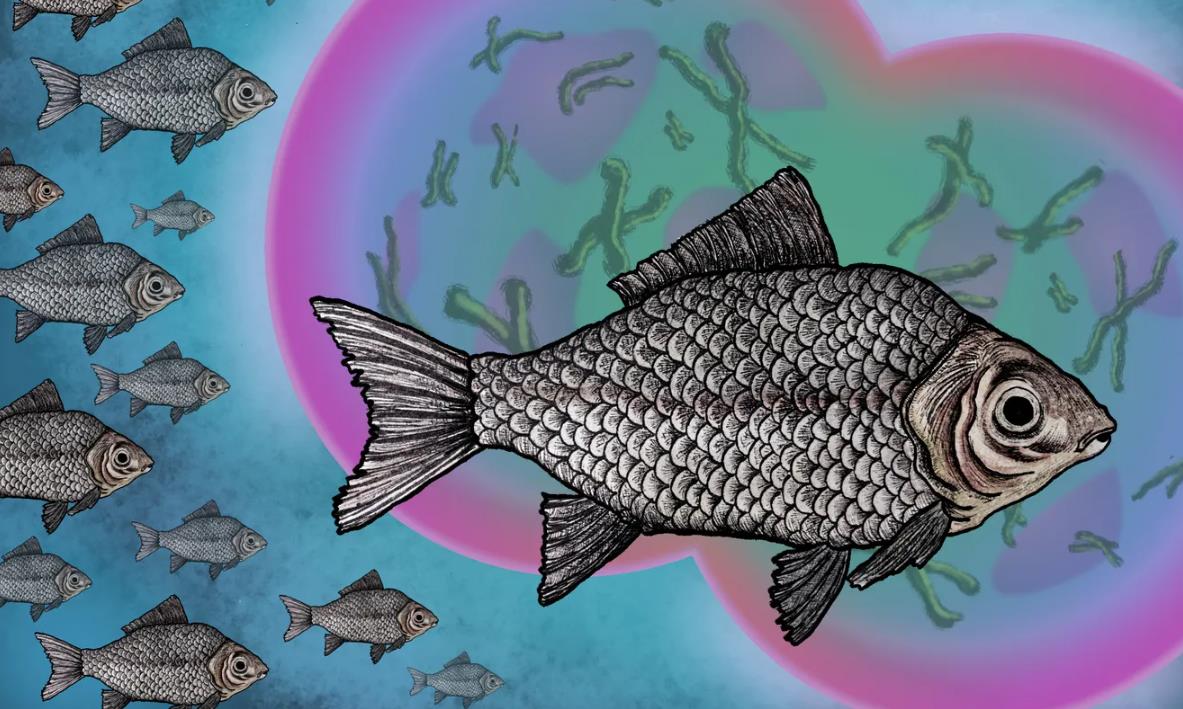 The Prussian carp reproduces mainly through partheogenesis. The produced offspring are clones of the female.

The Prussian carp (Carassius gibelio), native to Asia, is an invasive species in Europe. It is a close relative of the goldfish, and competes with the endangered native crucian carp for the same habitat. However, while goldfish and crucian carp usually reproduce sexually, the Prussian carp has a major evolutionary advantage: females can save the time-consuming search for a mate.

Parthenogenesis in the water

Instead, female Prussian carps use sperm of male crucian carps, or other carp species. To do this, they intermingle with a school of crucian carp, where their laid eggs are fertilized by the males.

"Unisexual, purely female reproduction enables rapid colonization of new habitats and offers invasive species a major advantage over their original competitors," explains Dunja Lamatsch from the Research Department for Limnology of the University of Innsbruck, based in Mondsee, Austria. Her research focuses on studying the mechanisms of unisexual reproduction in aquatic organisms.

In a study initiated by Lamatsch, she and an international team of researchers were able to completely decode the genome of the Prussian carp. As a result, the mechanism behind its unisexual reproduction can now be better understood.

However, accidents during meiosis or crossbreeding of related species repeatedly result in organisms that have more than 2 sets of chromosomes (polyploid). Polyploid higher vertebrates are not viable, but fish, amphibians, and reptiles are. Even new species can evolve this way- like the Prussian carp.

The Prussian carp is hexaploid- this means that it has six sets of chromosomes. Four of them came together by crossing unrelated fish species - the other two were added by crossing with a closely related fish.

"Presumably, at some point during these crossings, problems occurred in the formation of the gametes. That could be one of the triggers of unisexual reproduction," Lamatsch explains. "In species that reproduce parthenogenetically, meiosis fails, and fusion of gametes is no longer necessary."

In cooperation with research groups from the Leibniz Institute of Freshwater Ecology and Inland Fisheries in Berlin (IGB) and the University of Würzburg, it was possible to dissect the genome of the Prussian carp into individual chromosome sets. This is the first time that the entire genetic information of a hexaploid animal has been described, and all six sets of chromosomes have been analyzed. The genome of the Prussian carp consists of a total of 150 chromosomes, more than three times as many as the human genome.

The analyses shed light on how these six sets of chromosomes can coexist and work together. The identification of all 150 chromosomes makes it possible for the first time to understand the entire genome structure of the Prussian carp as well as its complicated evolutionary history. This opens up many more interesting research questions around the invasive fish.