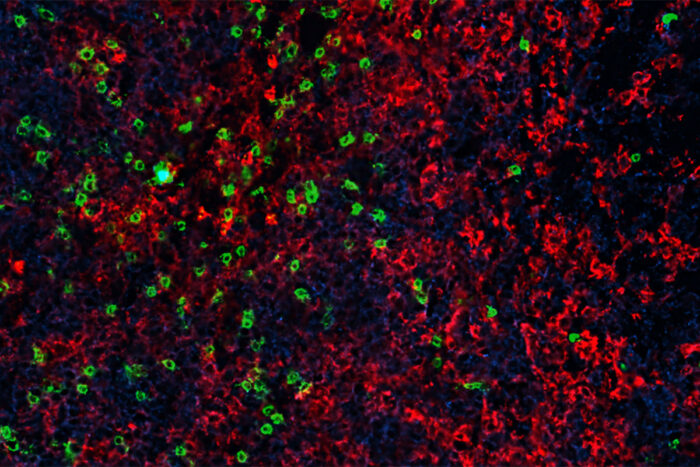 
A study by researchers at Washington University School of Medicine in St. Louis shows that treatment with an immunity boosting protein called interleukin 7 (IL-7) after an infusion of genetically modified T cells causes the cancer-fighting CAR-T cells to grow in number and become more effective at killing tumor cells. Shown are CAR-T cells infiltrating a lymphoma tumor in a mouse. Tumor cells are shown in blue, tumor-attacking CAR-T cells in green and immune cells called macrophages in red.


Advances in cellular immunotherapy that spur genetically modified T cells to attack cancer cells have revolutionized the treatment of certain blood cancers. Six such CAR-T cell therapies are approved by the Food and Drug Administration to treat certain types of leukemia, lymphoma and multiple myeloma. Still, some patients’ tumors don’t respond well to these therapies, and many patients who do well initially later see their cancers return.

Now, a new study by researchers at Washington University School of Medicine in St. Louis shows that additional treatment with an immunity boosting protein called interleukin 7 (IL-7) after an infusion of these genetically modified T cells causes the cancer-fighting CAR-T cells to grow in number and become more effective at killing tumor cells.

The mouse study — published June 13 in the journal Nature Communications — suggests promise for a phase 1 clinical trial at Siteman Cancer Center at Barnes-Jewish Hospital and Washington University School of Medicine in St. Louis. The clinical trial is investigating a long-acting genetically modified type of IL-7 in conjunction with CAR-T cells targeting CD19, a B cell antigen in patients with relapsed or refractory diffuse large B cell lymphoma (DLBCL). Siteman is the coordinating center and one of four sites across the country participating in the trial.

“Many researchers are trying different strategies to enhance the function of CAR-T cells in treating blood cancers,” said senior author John F. DiPersio, MD, PhD, the Virginia E. & Sam J. Golman Professor of Medicine and director of the Division of Oncology. “We’re interested in IL-7 because we know it is a major driver of T cell expansion. The body makes IL-7 naturally to ramp up the number of T cells when a person gets sick, for example. When we give a long-acting type of IL-7 to tumor-bearing immunodeficient mice soon after CAR-T cell treatment, we see a dramatic expansion of these CAR-T cells greater than ten-thousandfold compared to mice not receiving IL-7. These CAR-T cells also persist longer and show dramatically increased anti-tumor activity.”

With these problems in mind, the researchers — including first author Miriam Y. Kim, MD, an assistant professor of medicine, and co-senior author Matthew L. Cooper, PhD, an adjunct assistant professor of medicine — were interested in whether they could harness the body’s natural way of boosting T cell numbers to enhance the therapy. But natural IL-7 normally disappears from the body quickly. Therefore, DiPersio and his team tested a modified form of IL-7 that circulates in the body for weeks, making it much more effective at supporting the CAR-T cell expansion.

Investigating two different models of B cell lymphoma in mice, the researchers showed that mice receiving CAR-T cells and long-acting IL-7 survived almost six times longer than mice receiving CAR-T cells alone. Mice treated with CAR-T cells alone survived for about one month after therapy. All mice that received long-acting IL-7 soon after the CAR-T cell treatment were still living at the end of an experimental time frame of 175 days. Further, tumor sizes in the mice that had received CAR-T cells and IL-7 were dramatically reduced, to the point of being undetectable in the majority of mice by day 35.

“In mice that received the CAR-T cells alone, the disease is controlled briefly,” DiPersio said. “But by week three, the tumor starts to return. And by week four, they start to look like the control mice that didn’t receive any active therapy. But by adding long-acting IL-7, the numbers of CAR-T cells just explode, and those mice lived beyond the time frame we set for our experiment. Our study also suggests that it may be possible to fine-tune the expansion of the CAR-T cells by controlling the number of IL-7 doses that we give.”

Washington University research laid the groundwork for using IL-7 to boost the immune system to treat disease, including its use with CAR-T cells. In addition, Richard S. Hotchkiss, MD, a professor of anesthesiology, of medicine and of surgery, and his team have studied IL-7 for its use in stimulating T cells to fight sepsis, a life-threatening response to infection. Research from the Brain Tumor Center at Siteman also has shown promise for the use of long-acting IL-7 to enhance T cells in treating glioblastoma, an aggressive brain cancer.