Dresden and Japanese researchers show that a human-specific brain size gene causes a larger neocortex in the common marmoset, a non-human primate 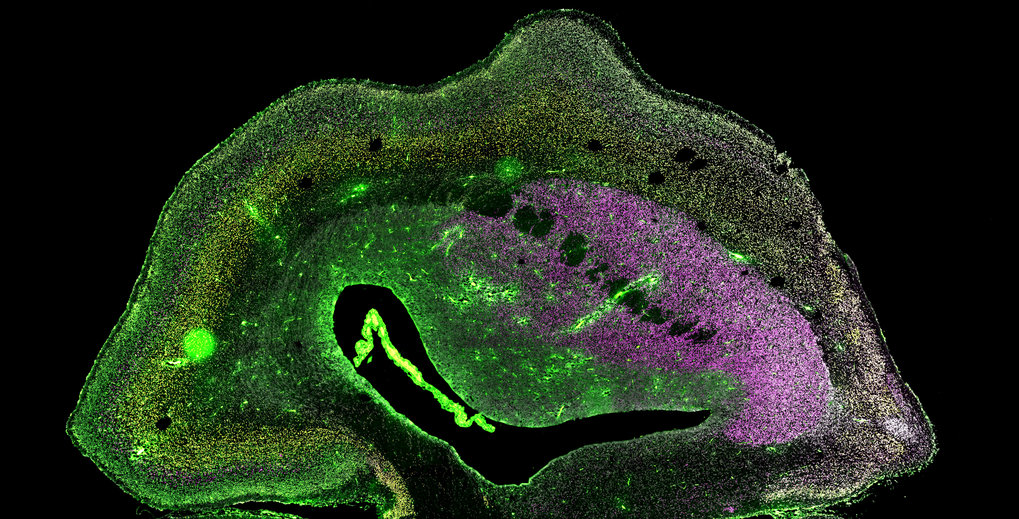 Microscopy image of a section through one brain hemisphere of a 101 day-old ARHGAP11B-transgenic marmoset fetus.… [more]

The human neocortex, the evolutionarily youngest part of the cerebral cortex, is about three times bigger than that of our closest relative, the chimpanzee. In order to fit inside the restricted space of the skull, its folding into wrinkles increased during evolution. A key question for scientists is how the human neocortex became so big. In a 2015 study, the research group of Wieland Huttner, a founding director of the Max Planck Institute of Molecular Cell Biology and Genetics (MPI-CBG), found that under the influence of the human-specific gene ARHGAP11B, mouse embryos produced many more neural progenitor cells and could even undergo folding of their normally unfolded neocortex. The results suggested that the gene ARHGAP11B plays a key role in the evolutionary expansion of the human neocortex.

The rise of the human-specific gene

The human-specific gene ARHGAP11B arose through a partial duplication of the widespread gene ARHGAP11A approximately five million years ago along the evolutionary lineage leading to Neanderthals, Denisovans, and present-day humans, and after this lineage had segregated from that leading to the chimpanzee.

The protein derived from the ARHGAP11B gene contains a sequence of 47 amino acids that is specific to humans and does not occur in the ARHGAP11A protein. However, this sequence is essential for the ability of ARHGAP11B to multiply brain stem cells. In 2016, Wieland Huttner's research group discovered the surprising reason for this: “The mutation of a single genetic letter, namely the change from a C to a G, in the ARHGAP11B gene leads to the loss of 55 nucleotides in the formation of the corresponding messenger RNA,” explains Wieland Huttner. “This results in a shift in the reading frame, which in turn leads to the human-specific, functionally essential sequence of 47 amino acids in the protein.” This base substitution probably happened much later than when this gene arose about 5 million years ago, anytime between 1.5 million and 500,000 years ago. “Such point mutations occur relatively frequently, but in the case of ARHGAP11B its advantages of forming a bigger brain seem to have immediately influenced human evolution”, state the researchers.

The gene’s effect in monkeys

A central question was if the human-specific gene ARHGAP11B would also cause an enlarged neocortex in non-human primates. To investigate this, the researchers in the group of Wieland Huttner teamed up with Erika Sasaki at the Central Institute for Experimental Animals (CIEA) in Kawasaki and Hideyuki Okano at the Keio University in Tokyo, both located in Japan, who had pioneered the development of a technology to generate transgenic non-human primates. Michael Heide, postdoc in the team of Wieland Huttner, travelled to Japan to work with the colleagues directly on-site. They generated transgenic common marmoset fetuses that now expressed the human-specific gene ARHGAP11B.

Japan has similarly high ethical standards and regulations regarding animal research and animal welfare as Germany does. The brains of 101-day-old common marmoset fetuses (50 days before the normal birth date) were obtained in Japan and exported to the MPI-CBG in Dresden for detailed analysis. Michael Heide reports: “We found indeed that the neocortex of the common marmoset brain was enlarged and the brain surface folded. Its cortical plate was also thicker than normal. Furthermore, we could see increased numbers of basal radial glia progenitors in the outer subventricular zone and increased numbers of upper-layer neurons. This type of cortical neuron increases in primate evolution.” The researchers now had for the first time functional evidence that ARHGAP11B causes an expansion of the primate neocortex.

Wieland Huttner, who led the study, concludes: “We confined our analyses to marmoset fetuses, because we anticipated that the expression of this human-specific gene would affect the neocortex development in the marmoset. In light of potential unforeseeable consequences with regard to postnatal brain function, we considered it a prerequisite – and mandatory from an ethical point of view – to first determine the effects of ARHGAP11B on the development of fetal marmoset neocortex.”

The researchers conclude that these results suggest that the human-specific ARHGAP11B gene may indeed have caused an expansion of the neocortex in the course of human evolution.