Linde AG shares fell the most in a year after the U.S. antitrust regulator raised an unexpected hurdle to the company’s $42 billion merger with Praxair Inc. that could derail the deal to create the world’s largest industrial gas producer. 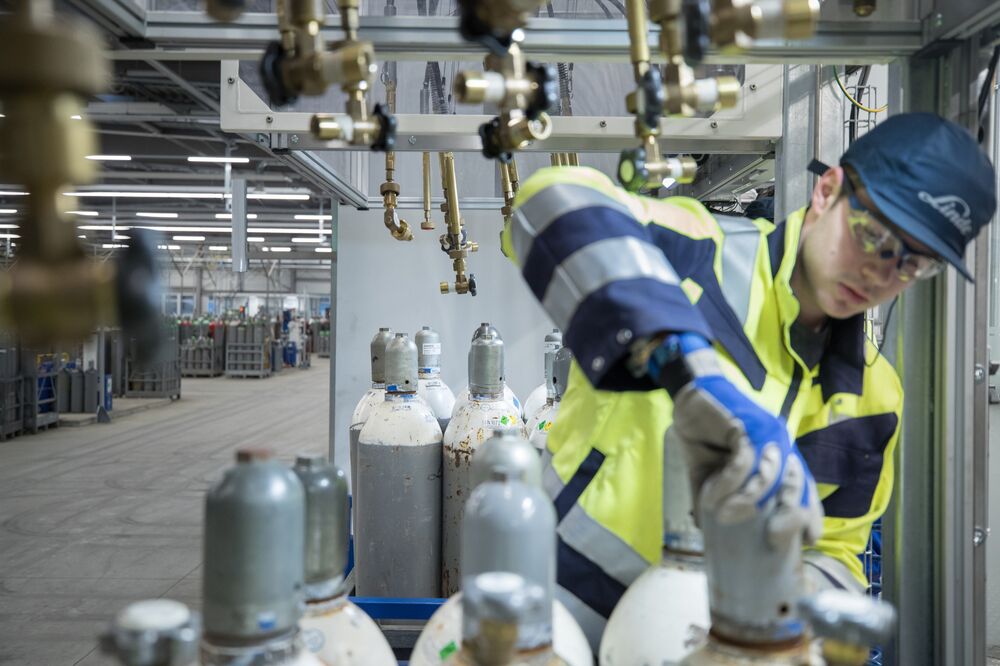 A worker prepares canisters ahead of filling inside the Linde AG compressed gas plant in Marl. Photographer: Jasper Juinen/Bloomberg

The Federal Trade Commission indicated it wants the companies to sell more assets before it approves their deal, Munich-based Linde said Sunday in a statement. The company noted a “higher likelihood” that the requirement may push total asset disposals to beyond the acceptable threshold outlined in the merger deal.

The companies’ agreement set limits on the assets they would be willing to jettison in return for regulatory clearance. Under the deal, the units to be sold must have annual sales of less than 3.7 billion euros ($4.3 billion) or income before interest, tax, depreciation and amortization of less than 1.1 billion euros. The latest requests from regulators are “more onerous than previously expected,” Linde said.

The companies now face the tough task of finding a way to make the deal work.

“Here’s the question: Can Praxair and Linde agree and execute divestitures sufficiently high to satisfy regulators, yet sufficiently low to preserve the financial logic of the combination?” Kevin McCarthy, an analyst at Vertical Research Partners LLC, said in an email.

“I doubt it means the end of the merger because management is very persuaded that the merger will bring advantages,” Miner said. “But it sure could challenge some synergies.”

The companies have already been striking agreements to shed assets to get the deal done. Last month, Linde announced the sale of North American businesses with combined 2017 revenue of about $1.7 billion. A few days earlier, Linde and Praxair agreed to sell a raft of industrial-gas plants in Europe to a Japanese competitor. They indicated at the time that additional sales may be necessary to get final approval from regulators.

“Linde was informed today that the U.S. Federal Trade Commission has expressed expectations with regard to additional divestiture commitments and the respective buyers that are seen as necessary” to approve the deal, Linde said in the statement. “The talks with the FTC about the necessary divestiture commitments are being continued with the aim to achieve an acceptable outcome for all involved.”

Praxair’s shares have increased by 24 percent since the deal was announced.

Under German security laws, publicly listed companies must inform capital markets about potentially market-moving information as soon as possible to forestall the possibility of insider trading.

A spokesman for Linde declined to comment further, and Praxair couldn’t be reached for comment on Sunday. The companies have set Oct. 24 to complete the deal.

By Steven Arons  and Cynthia Koons